Average: 3 (Selected by the creator)

Demo #2 in development. Demo #1 is unavailable. First Microdemo is available now on Platform Builder explore and is also available on Gamejolt and Itch on Windows PC.
The Adventures of Super Mike 1 is a 2D side-scrolling platformer created by Christian Game Maker. It's a big game with some Mario-like stuff started in February of 2018. The game consists of 120 levels. With almost 100% custom sprites and music. The game is also known as ASM.

The Adventures of Super Mike's development started in mid-late February of 2018. The game's original concept originated from 3D and 2D Super Mario games. Many of Mario's gameplay concepts were later dropped when the developers decided to make the game more unique. As with many games under development, the game has changed immensly since the first release.

The gameplay has some attributes that have been seen in Mario games, and ASM was originally intended to be a Mario-like game. Each level contains a set mechanic which is focused on, and is expanded on as the level continues. Some levels have a mechanic come back mixed in with another mechanic which makes for a more interesting gameplay experience. The objective of almost every level is to locate the Bible Verse Card. (BVC)

There are 2 level forms. Classic, and HUB. Classic levels are your typical 2D sidescroller type levels, where as HUB levels are a massive play field you need to explore in, and achieve many different tasks to obtain a BVC. Such as racing, searching, battling, etc.

The game uses a HUB world in order for the player to choose what to do. The "Main/Central" area is where all of the player's game settings are controlled, where shops are, and where the level selector is. Mike's main form of travel is the BVC 7000 Rocket.

There are a bunch of items in ASM. The following is a list of the announced main item power-ups:

The Super Cap is based on the Super Mushroom. It allows the player to gain 1 Health Point (HP) and bash blocks. Depending on the level, the Super Cap can change other caps into different items as listed above. The character also gets his shirt changed to green, and the cap also changed to green.

The Standard Boomerang turns the character's shirt and cap yellow, and the character get's little yellow and red boomerangs which on impact, the boomerangs are destroyed. Also, the boomerangs do not return to the character. When fired, they go straight, then after going a certain distance, the boomerang goes in the opposite direction until it either collides with something, or is erased by the engine for being in existence for too long.

The Super Boomerang changes the character and his cap to blue. The player gets a large blue boomerang which can go through walls and enemies, and it returns to the character. It also can destroy blocks. You can only shoot 1 boomerang at a time (unless you get ), and each boomerang item you acquire will only give you 1 more boomerang.

Based on the iconic Mario Power-up, the Super Leaf, Metal Puddy is a substance which puddy-like. It can morph into all sorts of things and can change weight etc.

The Springy Box is a blue box that Mike magically somehow gets sprung into the air by somehow entering it, then being launched into the air. The box can also be picked up and used elsewhere.

The Blue Portal can be used to teleport from one portal to another. Entering one will instantly bring you to another portal elsewhere.

Overview:
Meet Mike. An ordinary guy looking for adventure, and a new life. Little does he know, that he's about to be launched into an adventure bigger than he ever would have imagined.
Storyline
A group of people want to move out into new, unexplored lands. They find a land of which is inhabited by evil villains. Not knowing that these dastardly villains own the land of which they want to settle in, they begin starting a new life in this land. At first, these evil enemies don't really care that they are invading their land. Until...They found out...What they possess. They possess power beyond measure. Power to defeat the enemies. The BVC's. (Bible Verse Cards.) The Bible Verse Cards have power, over anything! The enemies decide to take action. Else, their miserable existence will cease. On the very day that they dedicate their new town, the villains attack. Taking away the BVC's. And taking them high into the air, and scattering them. Mike, is one of them. A skeptic of sorts. He doesn't believe what the townspeople believe. Though he doesn't care for the BVC's, he decides to take action against the dastardly villains. Running across a special cap, with special powers, he attempts to stop them. Then, seeing that he is a huge problem for them, blast him off to a far, far away forest. While there, he meets new friends, and some old ones, and tries to figure out what is so special about the BVC's. While learning along the way, that they do have power. Little does Mike know, that there will be lots of future adventures of which he isn't sure he will be able to face on his own. Facing dangerous mountains, going across hot deserts, through a remote island, and even through an electrified city.

The Adventures of Super Mike's development started in February 2018. The first public release was on the Platform Builder Explore. It was released on October 14 of 2018 having 1 level, and 3 main items featured. Including the Super Cap, Standard Boomerang, and Metal Puddy. The Metal Puddy was intended to be a side-goal to unlock a 30 second minigame if found, and a couple of tasks completed.

The game's 2nd demo is under development currently. CGM_games is hoping it will be released 2020.

A few days after the game was released, a poll was made on the Platform Builder forums to see if the award seal could be given to the game. That poll can be viewed here. The game has been having members quite excited to see the next demo released. Awhile later, a Microdemo was released. It featured a near completely re-designed look, and tons of changes and additions. Many players felt that the game was too complex. Since the level was small, with tons of elements that were "too confusing." CGM realized this mistake, and promised that the next time he did a microdemo, this would be fixed. Other than this mistake, the players loved the concepts, and couldn't wait to see them in their full potential.

The Dark One (Tentative name)

The main villain is "The Dark One." He tries to stop Mike at all costs using some of the most unique tactics. Such as impersonation, temptation, etc. The Dark One sends out many traps to destroy Mike, and many baddies.

Mr. Pokey is a boss Mike comes across in World 3.

Mike is the main protagonist of the game. He is very skeptical of just about everything. He believes only what he can see. If it can't be seen, touched, heard, felt, it's not there.

Max is Mike's faithful man's-best-friend. He can talk, and is very playful. He can run super fast, jump really high, and use his claws to do all sorts of stuff. He is intended to be the only character P2 can play as in co-op mode.

Matthew is a fix-it man. He loves to build stuff. He's got a knack for taking odd materials and quickly making them into something amazing. Matthew and Mike were friends when they were younger, and on Mike's adventure, they meet back up.

This is a teaser for DEMO #2. The action depicted here is unconfirmed.

Promotional artwork with the old logo. 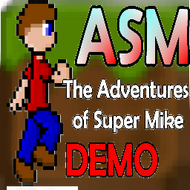